KUALA LUMPUR: With just a few strikes from an excavator, parts of the iconic Pudu Prison wall came crashing down last night, marking the beginning of a new era for the historical area.

Even before the clock struck 10pm, people were crowding Jalan Pudu to witness the tearing down of part of the 394m prison wall.

Cameras were flashing the moment an excavator started demolition of the wall from inside the prison area at about 10.20pm.

An excavator knocking down the wall of the iconic Pudu Prison, the more than 100-year-old jail that is a historic part of Kuala Lumpur. Over the next 10 years, the site will be transformed into a modern mall and residential area. — IBRAHIM MOHTAR / The Star

The wall was full of mold, algae and weeds, indicating its old age.

According to a City Hall worker, two excavators would be used during the four-day demolition that will end on Thursday.

“A total of 25 workers will be involved in this project. We have put up plastic barriers along the demolition site and Jalan Pudu will be closed from 10pm until 5am during this period,” he said last night before the demolition work started.

“Cleaning up of the debris will be done in the morning at about 8am.”

“I regret to see one of the oldest landmarks in Kuala Lumpur being destroyed. However, I will speak to the Government regarding the preservation of the wall facing Jalan Hang Tuah,” he said.

End of an icon: Passers-by watching the demolition of the Pudu Prison in Kuala Lumpur last night.

He said the architecture of Pudu Prison reflected the work of builders during the English colonial times.

An ex-prisoner Suharto Abdul Wahab said he went last night “to make sure the wall came down.”

“It is a pity that the building is going down because of its historical value. But I don’t have any sentimental memories,” said Suharto, who served time in the 1980s for drug possession.

“During that time, each cell could fit about eight or nine people. We were packed like sardines.”

Long-time resident of the Pudu area, Yong Kong Kin, 61, came with his son to witness the demolition.

“Although it is sad that the building is being demolished, it is necessary for the historical building to go because the ‘new’ society needs to make way for development,” he said.

Leave part of Pudu Jail behind for posterity, UDA told

KUALA LUMPUR: UDA Holdings Berhad (UDA) has been urged to leave behind part of the Pudu Jail wall for posterity.

Fong Kui Lun (DAP-Bukit Bintang) wants the main entrance and part of the jail untouched as a piece of history for the benefit of future generations.

He said there was still time for UDA to do that as the wall fronting Jalan Pudu was only partially demolished, thus far.

"We want the wall facing Jalan Hang Tuah to remain as part of a historical building in Malaysia.

"In Kuala Lumpur, there are very few buildings which are 100 years old, so the move to keep part of the Pudu Jail for future generations is a good one," he told reporters at the Parliament lobby here today.

Yesterday, Deputy Finance Minister Datuk Dr Awang Adek Hussin said despite its age, Pudu Jail would not be turned into a heritage site as it was not a place to take pride in. 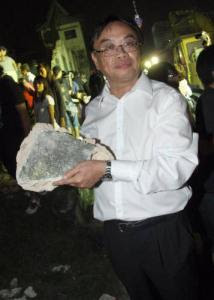